VIEW MOTORHOMES GET YOUR QUOTE 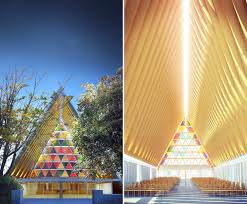 Designed by Japanese architect Shigeru Ban’s. His notable buildings include the Tokyo Curtain Wall House, the Pompidou Museum in Metz, France and he was the first architect in Japan to use paper as a primary building material.

The Cardboard Cathedral is located on the corner of Madras and Hereford Streets on a section allocated to the Anglican church in Christchurch’s original 1850 survey opposite Latimer Square.

This building will be the “face” of New Christchurch.

More info about the Cardboard Cathedral

Tips to help you stay safe in New Zealand

New Zealand has a great outdoors to explore. Walking, tramping, hiking, climbing, boating,.. Go for it! Just make sure you are safe from the start till[...]

We love hearing travel stories from our guests, especially those like the one we received from Marijke & Jacob Jan! Not only did they share their[...]

Aiming to be the best for Quality and Safety

Aiming to be the best campervan hire company in New Zealand can be hard work! Every winter we do a thorough inspection of all[...]

What is the best time to start planning your holiday? How about right now!? It may feel like you’ve got plenty of time before[...]

Geography and Climate New Zealand lies in the southern part of the Pacific Ocean. Its nearest neighbour is Australia which is around 1,600 kilometres (995[...]

Our motorhomes are all self-contained, so shower, toilet and grey, black and freshwater tank. Perfect for freedom camping in New Zealand. This instruction video shows[...]

This model campervan we have for rent is called: Explorer.  Fully self-contained so perfect to explore New Zealand. Easy to drive and park so no[...]

Our Seeker motorhome in New Zealand

This is our ‘Seeker’ motorhome. the biggest one we have available for rent in New Zealand. Perfect for freedom camping. Solar so you never run out[...]